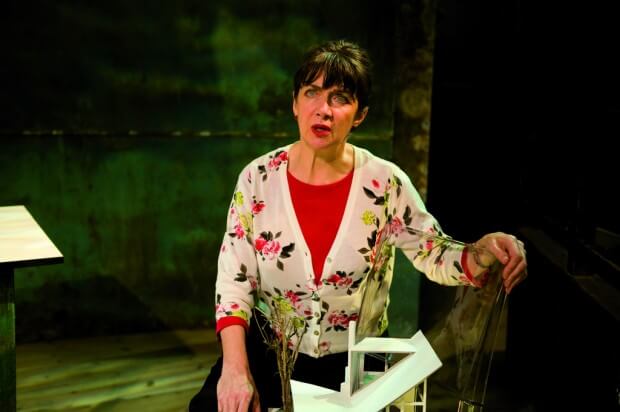 The List is an award winning story of a woman struggling to adjust to rural life. Increasingly isolated, she keeps life in order through obsessive list making where remembering to do something or neglecting it becomes the difference between life and death.

The List is the first part in Jennifer Tremblay’s powerful and evocative trilogy and is followed by The Carousel and The Deliverance. This Stellar Quines production was a European premiere and created for the Edinburgh Festival Fringe in 2012. The production was designed for the Anatomy Lecture Theatre at Summerhall and also undertook a short Scottish tour. It returned to the Fringe and toured again in 2013.

"It is as close to perfection as one could hope for"

"a sinister and gripping play with extreme power"

This website uses cookies to improve your experience while you navigate through the website. Out of these, the cookies that are categorized as necessary are stored on your browser as they are essential for the working of basic functionalities of the website. We also use third-party cookies that help us analyze and understand how you use this website. These cookies will be stored in your browser only with your consent. You also have the option to opt-out of these cookies. But opting out of some of these cookies may affect your browsing experience.
Necessary Always Enabled

Performance cookies are used to understand and analyze the key performance indexes of the website which helps in delivering a better user experience for the visitors.

Analytical cookies are used to understand how visitors interact with the website. These cookies help provide information on metrics the number of visitors, bounce rate, traffic source, etc.

Advertisement cookies are used to provide visitors with relevant ads and marketing campaigns. These cookies track visitors across websites and collect information to provide customized ads.

Other uncategorized cookies are those that are being analyzed and have not been classified into a category as yet.